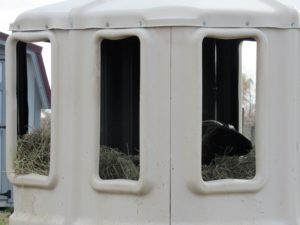 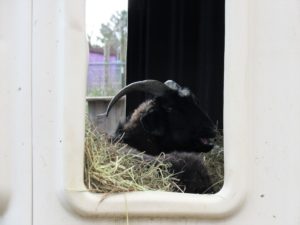 “My friend Lucky hangs out and sleeps in one of the hay feeders. He’s only out when other people aren’t around. People haven’t always been nice to him. They actually used him as coyote bait.  So, he’s really scared of people he doesn’t know. We had to stop some kids from chasing him one day and it was a week before he’d go into the pen Mommie Janet feeds the goats in. It’s important they learn to go in the pen so if they need vet care she has a place they go where she can shut the gate so the vet (Auntie Wilhelm) can catch them. Plus, none of us want to see any of the family here afraid.”